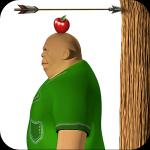 This game was inspired by Friv 4 Games. Grab bow and arrow and try to hit the apple on the head of your friend. Control the strength of every shoot by holding the left mouse button, the strength will be depicted on the left corner of the screen. Don't hit the body of your friend or the Apple Shooter game will end immediately. Each level positions you further away from the target. Click to play the game Apple Shooter now!

Apple shooter is such a simple but interesting game that you should try out. Once you play it, you are likely to be addicted to it. The player’s task is to shoot the apple off your friend’s head.

If you can shoot it down successfully, many more challenging levels will be opened. If you cannot, it’s really unlucky that you lose “your 2D friend”. The secret tip for you is that the longer you press on the mouse, the farther distance the arrow will go.  Now why don’t you show off your archery skill and fire your arrow!

Grab your bow and arrow, aim precisely and shoot firmly into the apple with Apple Shooter at Friv 4. Let’s see how many apples you can destroy!

Quite creepy but interesting, simple but full of challenges and required a lot of skills, Apple Shooter at the free friv 2018 game is a great option for those who find something relaxing to play. Grab your bow and arrow, then try to hit the apple on the heat you the guy standing far away.

You must control the strength of every shoot to have a perfect hit. The strength is displayed on the left corner of the screen. Try your best to avoid shooting at the guy. Otherwise, you will begin from the start. The difficulty level is going to be harder and harder, so that it’s worth to play, right? At friv4, there are tons of shooting game waiting for you to enjoy, check out http://www.friv-2018.net/ Enjoy!

Instructions: Aim and shoot by using your mouse.