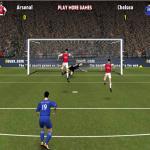 In this exciting football game, your biggest mission is to kick many balls into your opponent’s goal as you can. You can play directly with other players or CPU in each match. Note that, as soon as the ball appears, you need to kick quickly because you have only a small amount of time to do so. If not, you will miss the opportunity and turns in the match.

There are 2 turns in each match, in which you have 2 turns and your opponent also has 2 turns. So, the chance of winning is evenly distributed to 2 players in the match.

Tadaaa! This is an attractive football match and its purpose is to find the gold player who can score as many goals as possible. It is very attractive, right? What are you waiting for? Join England Premier League – a cool football game for everyone at friv online Games.

To start this game, you are free to choose your favorite character and some famous football teams such as Liverpool, Chelsea, Man. City, or Man. Utd and etc. Try your best to win the championship and become the best player of all time at friv Games school.

Try your best to kick as many balls into the goal and complete each match in the shortest time. If you love to play more with some sports games, try Backyard Baseball or 100 Meter Sprint at game friv online. Don’t think anymore! Play it right now!

Use your mouse to kick the ball into the goal.