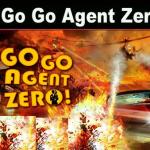 Run as crazy person away from a wave of enemies. How can you survive while dealing with tons of weapons like that? Play Go Go Agent Zero at Friv 4 now!

Do you like outdoor activities? Are you good at running or jumping? If not, you can’t survive in Go Go Agent Zero at Friv game 2018. Why can I say that? Because this game required you to run and jump continuously like a crazy person to escape from the enemies. This is how the story begins.

Agent Zero blew up the enemy, then he is chased by them who are equipped with many advanced vehicles and weapons. In spite of having speed bikes, jet skis, tanks, helicopters and so on, they can’t catch up with him because Agent Zero has the ability to run faster than a high-speed car and jump higher than a plane flying in the sky.

So magical, isn’t it?  And your mission in this amazing combination of jumping, running and shooting game is to help him escape safely away from his enemies while shooting them down. Take grenades, rockets and pick up the guns, then shut up. Blow up their speed bikes, jet skis, destroy their helicopters, and eliminate all your foes.

You can only move to the next level when the agent reaches his helicopter. Let’ see how long he can run. At friv free online Games, you can find many games as interesting as this one, such as http://www.friv-2018.net/ . Have a great time! Instructions: Use arrow keys to jump, slide and shoot. Press Spacebar to use grenades.