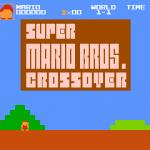 You feel the classic version of Super Mario is not enough for you, don’t you? Play the remake of this famous game – Super Mario Bros Crossover 2 at Friv 2018!

You are now in your thirties and you think of a legend game which you usually played and got addicted to - Super Mario – as a reminder of your unforgettable childhood. Now, this original version Super Mario has another remake and it’s sure that you will be brought back to that time, it is Super Mario Bros Crossover 2 at friv game.

Choose between: Mario, Simon, Link and other characters as your own superhero. Each of them has their own special abilities and you should be wise while choosing one of them for each round.

For example, Mario is the one and the only character having the ability to run. He can get fireball powers when obtaining the flower just like in the original. Whereas, Bill Shoot has the ability to shoot in different directions.

Try your best to complete your mission. Good luck and fully relax your mind. You can choose to play other similar games at online Games friv such as http://www.friv-2018.net/

How to play: Use the arrow keys to navigate, Z key to jump and X to attack or run.