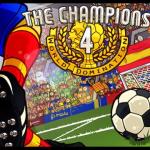 Great! The Champions 4: World Domination has officially appeared at Friv Games – a safe place to play thousands of online games around the world. Don’t miss this exciting football game if you are a fan of football games.

In the game at Friv4 free Games, your biggest mission is to control your football team wisely, keep the ball continuously and kick it the goal of your opponent. This task is not simple because you will have to control many players at the time. Therefore, all you need is to observe carefully, guide each player moving into the right positions, catch the ball, and shoot as many balls as possible into the goal of your opponent.

Who will be the champion this season? It is the wonderful time to jump into this exciting football game at Friv Games free! Don’ forget to explore more with some similar games such as http://www.friv-2018.net/ at Friv 2018.

Use arrow keys or WASD to control the players, X or N to pass or change player, C or M to shoot.