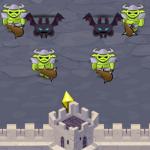 Castle Defense is a great combination of defense game and shooting game in which you have to defend your castle in an epic battle against hordes of terrifying monsters. They took over other lands and now they are coming for your land. You may enjoy several games about defending the castle at friv games 2020 for sure but don't miss this game because it offers unique gameplay.

In other defense games, you may place several towers and units along the way that enemies come, but here, you stand in the gate and stop them from there. Enemies are crowded and your towers won’t shoot or attack enemies automatically. This means you have to operate them. Before starting the level one, you can choose your favorite characters from wizard Severidric, princess Gendra and more.

Choosing a character doesn’t affect the outcome of the battle, so choose whoever you want. The monster army includes bat, orc, troll, giant and other scary creatures. As you level up, more powerful monsters will appear on https://friv-2018.net/. To deal with them, you have to upgrade 5 attributes including strength, health, agility, critical and knockback. Besides, during gaming, you also unlock some power-ups such as magic robe or wizard.

After unlocking them all, you can select a magic robe or wizard staff to equip before the battle. Additionally, you also have to stay focus on upgrading magic towers to unlock spells. Prepare your defense, stop them at all costs. Don’t let them in. Hope your kingdom is always safe. Refresh yourself with other games such as Match Arena Game and High Speed Bike Simulator.

Use your mouse to defend your kingdom.