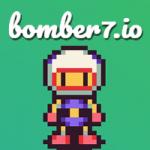 Plant bombs and kill all enemies on your way. Bomber 7 brings you to an epic battle in which various players try to kill each other. Enjoy Bomber 7 at friv2018!

You don’t know what to do in your free time? You are looking for an interesting game in which you can interact with others than playing alone? Well, welcome to Bomber 7 - a cool multiplayer io game. This friv com Games play game brings you to a maze in which you have to open your way and kill other players by releasing various bombs.

To start, you have to destroy walls blocking your way to collect different bonuses. These bonuses hide in those blocks. So, try your best to collect as many of them as possible to upgrade your skills such as the expansion of your explosions or your speed. After that, you can start to kill your enemies before being killed in the friv Games 2018.

You should remember that once you place bombs, you must run away or hide to avoid being killed by your own bombs. Because it’s a multiplayer online game, so the others also try their best to destroy you. Be careful in every move and build a wise strategy. Otherwise, you will be eliminated. Jump in now! There are various amazing games waiting for you at friv com Games play, such as Bomb it 6 , Bomb it 3, Bomb it 2

Instructions: Use arrow keys to move and spacebar to plant bombs.