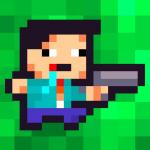 Is Noob a superhero? This is ridiculous! Despite this, you'll let them use guns and explosives against machines. It is within your ability to turn it into a pro. You will take on the role of a daring Noob, an undercover operative who frequently finds himself in perilous circumstances. Gather ammunition and use it to take down the robot guards! Hack PCs using USB devices, demolish all routers on the level, and don't forget the dynamite you'll need to complete the level. Yes, it is often assumed that a newbie is someone who does not know how to play games (particularly Minecraft), but you can fix everything and turn a noob into a true super hero.

You should not keep the game for yourself but share it with your friends. And join your friends to join right now in the game to be able to relieve stress. Why don't you allow yourself to join fairies and some other interesting games Temple Run Holi Festival at Friv 2018.

Use the arrow keys on the keyboard or touch controls to select the level. Arrow keys to move, space bar to jump and the letter "C" to shoot. Shoot the enemies to kill them. You have to dest.