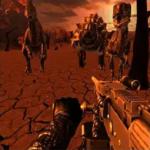 Dinosaurs Survival The End Of World

Dinosaurs are really scary. You need to eliminate them for a chance to survive. Do you want to destroy them? If yes, do not hesitate to start now on the game Dinosaurs Survival The End Of World at friv free games. Unleash discovering free online games on your computer and mobile browsers. Imagine today is the end of the world. You will have to go back to the past where the dinosaurs threatened.

You will start in this war with extremely gloomy scenery. Your goal is to attack the dinosaurs to bring survival to yourself. They appear very crowded and their destructive power is huge. So you can kill many dinosaurs. Please move to the shelter. Then use the gun you have on the hand to capture well on dinosaurs to attack. Every time you destroy the dinosaurs. You will bring yourself some points to be able to upgrade to new speeds.

Win against these barbaric devastating dinosaurs to become the only surviving player in the land of danger. Unleash fighting with powerful forces. Numerous are many attractive only in the game Dinosaurs Survival The End Of World. A new fighting game like that you should share with your friends. Join your friends right now to join the game so you can unleash your experience in the most intense dinosaur war ever. The great thing is that there will be other similar fighting games that you have never discovered like World War Zombie and Airport Clash 3D at https://friv-2018.net/

Use the arrow keys, WASD to be able to move, mouse to aim.