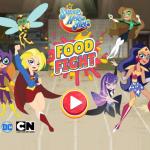 Take part in an exciting battle and defeat some adversaries in the DC Super Hero Girls: Food Fight game at Friv 2018! Wonder Woman, Batgirl, Zatanna, and the other female superheroes look to be in danger even at a school cafeteria! They're always being pursued by evil, and this time you'll have to help defeat the criminals! Toss food at your opponents to aid your favorite heroes and vanquish them! In this action-packed adventure game, it's up to you to be the best warrior. Rapidly go throughout the cafeteria, grab a few dishes, and hurl them at your opponent! Things will become dirty soon, much like a real food fight, so be careful!

For you, the Super Hero Girls have arranged three exciting and fast-paced bouts. During your confrontations, you'll come across some of your most formidable foes, like Harley Quinn, Catwoman, and even Poison Ivy! You have 60 seconds to toss food items at your opponents in order to win. Will you be able to fight the villains and restore order in Metropolis? It's not going to be simple for you to fight your conflicts. Depending on your score, you will be awarded stars at the conclusion of each stage.

Such an awesome fighting game so you shouldn't keep it to yourself but share it with your friends. Join your friends now to join the game. If these games leave you with a lot of excitement, let's explore and a few other similar fighting games like Survive The Glass Bridge and Dalgona Squid Game.

All you need is a keyboard to participate in the food fight. To move, press the Arrow Keys, and to attack, press the Space Bar.